Pat was born and raised on a farm in rural Phelps County along with his two older brothers.  After graduating from Rolla High School, he attended Mizzou on a National Merit Scholarship.  Pat earned both a bachelor's degree in political science, and a law degree from Mizzou.

Pat began his career working in the State Tax Commission.  He then served as an Assistant Attorney General for the State of Missouri for two years before returning home to private law practice in Rolla, then to work in the Phelps County Prosecuting Attorney's office.

Pat has been a practicing lawyer for over 30 years. He has tried numerous court and jury trials in both civil and criminal cases.  Pat was previously the chief assistant prosecutor for St. Francois County, a post he held for nearly 20 years.

Pat was elected Judge on November 6, 2018.  Since becoming judge, Pat has been asked to serve as a 24th Circuit coordinator for the Missouri Supreme Court’s Civic Education Committee and he participated in the editing of the Missouri Criminal Bench Book used by judges throughout the state.  He has also been serving as municipal court judge for the cities of Leadington, Leadwood, and Iron Mountain Lake, as the Circuit Court now assists those municipalities.

"I have devoted my life to public service, and for the past many years to the service of the people of St. Francois County. When I was elected, I told the people I would serve with honesty, integrity, hard work and common sense.  I believe my record shows I have done so fairly and impartially.  I have earned the trust the people of this county have placed in me.  I ask for another four years of their trust and confidence.”

Pat is a past winner of the Daily Journal/Farmington Press "Citizen of the Year" award, the "Distinguished Service Award" from the Missouri Baptist Convention Christian Life Commission, and the "I Stand Up for Kids" award from the Children's Advocacy Center of East Central Missouri.  He has twice been named "Heartland Hero" by the Farmington R-7 School District.  He has volunteered for many other civic organizations and causes.

Pat and his wife Michele live in Farmington, where she is chief financial and operations officer and executive vice president at Ozarks Federal Savings and Loan Association.  They have two adult children, Andrew and Melanie. 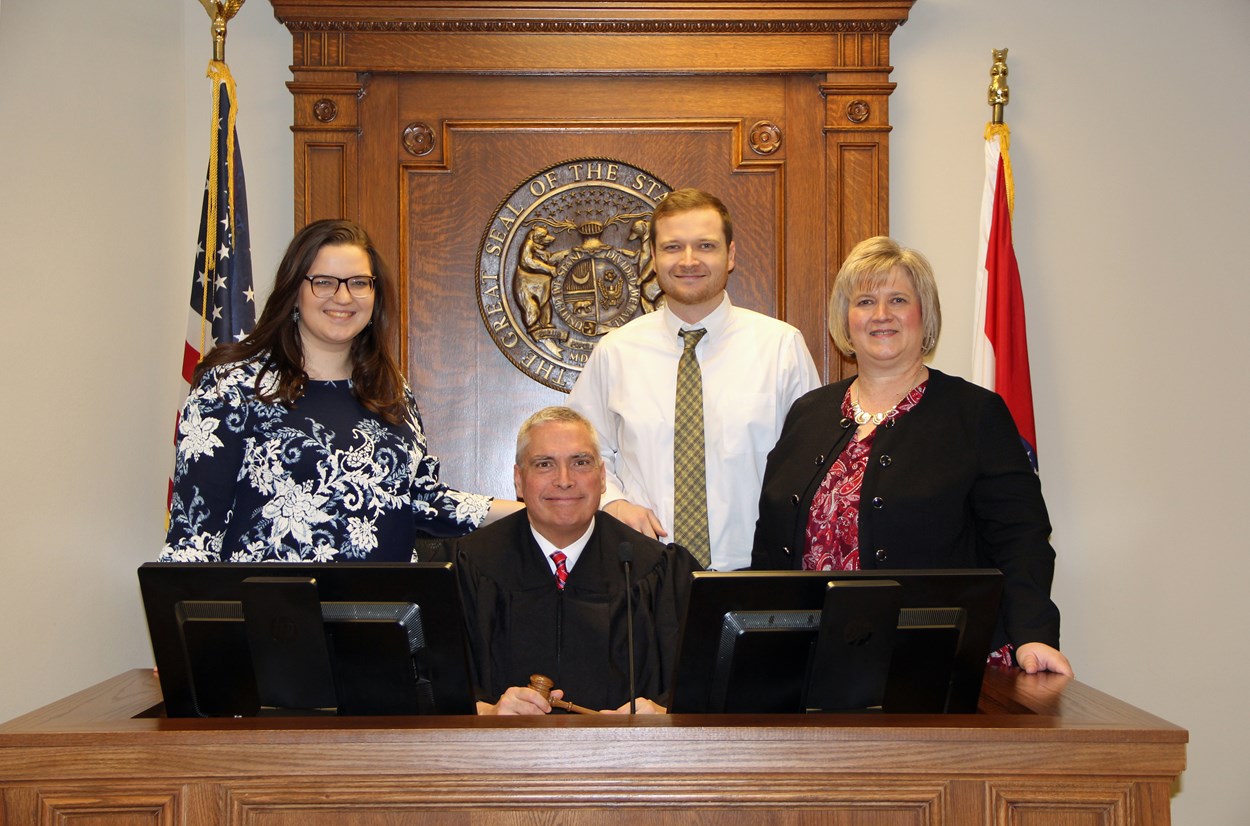 Judge Patrick King has announced Monday he will seek re-election to the office of Associate Circuit Judge Division 4 for St. Francois County. He is running as a Republican.

King has served as judge since Jan. 1, 2019. Prior to that, he was the chief assistant prosecutor for St. Francois County, a post he held for nearly 20 years.

He has actively practiced law for more than 30 years, and in that time tried numerous court and jury trials.

"I have devoted my life to public service, and for the past many years to the service of the people of St. Francois County," King said. "When I was elected, I told the people I would serve with honesty, integrity, hard work and common sense.

"I believe my record shows I have done so fairly and impartially. I have earned the trust the people of this county have placed in me. I ask for another four years of their trust and confidence.”

Winning by a margin of approximately 2,000 votes over incumbent Shawn McCarver, Patrick King won the race for Associate Circuit Judge, Division 4. King expressed his thanks to the voters Tuesday night, and said the win is the result of hard work, which will extend into his judgeship.

"We knocked on thousands of doors and it paid off. Honesty, integrity, hard work and common sense is all I've ever promised the people of St. Francois County and they believed that message. I will go to work every day for them and it will be my great honor to be their judge."

The Farmington R-7 Board of Education met in regular session on Tuesday to recognize a student, a community leader and to discuss the district’s student achievement reports.

The board also recognized Pat King as the high school’s Heartland Hero award. According to Hostetler, during the nomination meeting, there really wasn’t a better choice than King.

During his presentation, Hostetler spoke how King - a member of the Farmington Kiwanis - helped revive the school's Key Club in 2010 after years of not having one. He also added how King was instrumental in getting the White-Out Game and the Pink-Out Game last year.
Wednesday, March 23, 2016 12:00 AM

St. Francois County Treasurer Kerry Glore recently gave her recommendation for a new member for the Network for Emergency Shelter Services (NESS) Board and also discussed the board’s history.

Glore gave a little history on the NESS Board to help others better understand what they actually do.

Glore said in 1994 voters passed the money, but they needed a board to administer the money so the county commissioners at that time created a board that they would appoint and it’s called the Network for Emergency Shelter Services or NESS Board.

“The money that is collected comes to the treasurer and then it is turned over to that board,” said Glore. “The board consists of counties within the circuit, for example, St. Francois County has two representatives and one of those representatives turned in her resignation after many years of service.”
Glore said because of Mildred Smith’s resignation, they were looking for a replacement and they had put out the word about the need for someone to serve on that board.

“Somebody answered the call and that was Pat King, our assistant prosecuting attorney,” said Glore. “So I respectfully submit Pat King’s name as a replacement for that board to represent St. Francois County.”

The other counties that are included are Ste. Genevieve and Washington County. They also passed those taxes and are a part of the board.

The St. Francois County Commission accepted Glore’s recommendation and appointed King to the NESS Board. It’s an ongoing position and King will be a representative until he resigns.

Glore feels King is a great guy and will do a wonderful job at representing St. Francois County and the commission agreed.

On Friday evening the Farmington Civic Center underwent a makeover from a gymnasium to the Farmington nightspot. Amidst the backdrop of multi-colored lights, white linen table clothes and music to coincide with the "Happy" theme for the evening, The Farmington Chamber of Commerce recognized area residents and businesses at the 2014 Greater Farmington Awards for Excellence.

During the awards portion of the evening, Shawnna Robinson, managing editor of the Farmington Press, delivered the Daily Journal/Farmington Press Citizen of the Year award to Patrick "Pat" King.

King, an assistant prosecuting attorney for the St. Francois County Prosecuting Attorney’s Office, has been an active member of the community since moving to the area in 1999.

Although King has been active in the community for his 15 years in Farmington, according to those who know him he is not a self-promoter nor does he volunteer his time and efforts for the reason of furthering his own position.

While presenting the award, Robinson spoke of King’s humbleness and his concern for others more than himself. She even predicted what King would say when he was notified of his award.

“There are so many others who deserve it instead of me,” King said. “So many other who do more than I do. I am just the guy who helps behind the scenes to direct where help is needed.”
During the award presentation, Robinson expounded on how King's accomplishments and devotion to the community were much deeper than just his commitment to the legal profession. For the last 10 years King has been on the Ministerial Alliance Benevolence Committee, serving as president. The committee oversees the alliance’s food pantry and thrift store. During his tenure, King has been known to roll up his sleeves or bundle up depending on the weather to help wherever he can.
“It was a cold winter morning when the St. Louis Food Bank delivered more than 20,000 pounds of food for distribution to 200 families,” Robinson told the audience Friday night. “Pat was found bagging heads of cabbage, lifting boxes into the trunks of vehicles and putting his faith into action.”

Robinson finished her presentation with a quote from famed humorist Erma Bombeck which, Robinson said, she believed best fit King. “Volunteers are the only human beings on the face of the Earth who reflect these nations’ compassion ... unselfish caring, patience and just plain loving one another.”
In addition to receiving the Citizen of the year award, earlier in the evening King awarded the Kiwanis Youth Leadership Award to Taylor Crites. The Youth Leadership Award reflects the mission of the Kiwanis to inspire young people to achieve their personal best through service.
VOLUNTEER CONTRIBUTE MEC Campaign Finance Reporting

Thank you for signing up!